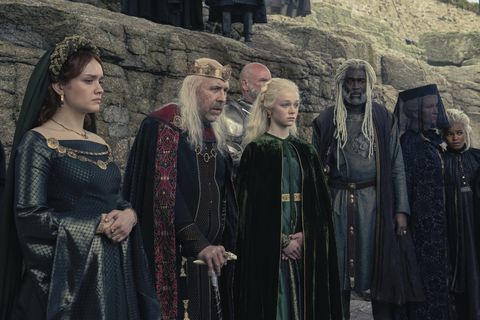 The formula: set the episode during a wedding or a funeral or an extravagant bachelor party or a trip to another country or some combination of these. Feature the opening act of stances between family members vying for the upper hand, followed by trades of advantages over the next two acts, followed by a bombshell in the fourth act that totally shifts the balance of power, followed by new alliances and more poses for the next exchange: the next episode. And repeat.

Episode 7 is so obviously within the Succession plot engine, we could probably recap everything and substitute some “Roys” for some “Targaryens” and you wouldn’t know the difference. While the power struggle works well in modern New York City, and should translate that to fictional claims of the medieval throne: the dynamic now begins to creep (and creep hard) in Episode 7. It’s been too many years since the first episode, making the early-season fights almost inconsequential now; the power struggles of the previous episodes become irrelevant as the action progresses. While that other power struggle extravaganza takes place in real time, making the drama of Episode 1 continue to impact Episode 10, house of the dragon it has gone through some 15 years of history, during which the players we thought were important are now dead and the actions that seemed important are now just remnants of the past. The result: We are left wondering why we spent so much time building a drama whose outcome was obvious from the start, yet took seven hours to develop. We are talking about civil war.

Well, at least we are on the eve of that war at the end of Episode 7. Sides are chosen, dragons are aligned, now the Throne can be fought for. At least, when the King finally dies. Which he doesn’t have yet. Big sigh.

Anyway, let’s break down what happened on Sunday night the Success… —uh, we mean—house of the dragon. Yes! That’s the show we’re watching.

The main arc of episode 7 is the widening divide between Rhaenyra and Alicent, with the final scenes all but foreshadowing the war between the houses and the selection of future allies for that fight.

It starts at a funeral. Laena Velaryon, who died in the last episode during childbirth (suicide by dragon) rests in Driftmark. The entirety of Episode 7 takes place here.

It’s worth noting the balance of power at the moment. Three families live for control. Princess Rhaenyra Targaryen (Emma D’Arcy), who is the King’s appointed heir, and Laenor Velaryon (John Macmillan) have two illegitimate children; If Rhaenyra’s claim to the throne is not in dispute, her children’s certainly will be. Then there’s King Viserys (Paddy Considine) and Alicent Hightower (Olivia Cooke), who have three sons, all Targaryens, with the eldest, Aegon, possibly having equal claim to the throne as Rhaenyra. And then there are the two children of Daemon Targaryen (Matt Smith) with the now deceased Laena Velaryon. Daemon tends to remarry soon after his wife’s death, so his is a powerful house ready to join another.

The three families gather at the funeral with an equal number of busybodies. First, the grandparents. Otto Hightower (Rhys Ifans), now reinstated as Hand of the King, will attempt to advance Aegon’s claim. Corlys Velaryon (Steve Toussaint), “grandfather” to the children of the other two houses, Rhaenyra’s children and Daemon’s children, will attempt to advance Jacaerys’s claim, as he is Rhaenyra’s firstborn and therefore successor to the Throne by name through Rhaenyra.

Grandparents spend the funeral reception complimenting their grandchildren; however, both sets lack ambition: Aegon gets drunk as a sad boy and Jacaerys grimly contemplates what must happen for him to rule (“all the world [must be] he’s already dead.”) So, both grandsons are basically useless.

Another meddler in the family power battle is Larys Strong (Matthew Needham), who has already killed the real father of Rhaenyra’s children (his own brother) along with his own father, the Hand, helping House Hightower regain more control. . And finally, there is Daemon, the eternal busybody who, even at his wife’s funeral, is already making eyes with Rhaenyra. Viserys even asks him to return to King’s Landing, as if begging him to reclaim the throne, but Daemon resists, saying that he wants to stay on Pentos. This won’t last long.

As night falls, a member of the family finally seizes power. Aemond, Alicent’s youngest son, decides to claim the dragon Vhagar, now ownerless after Laena’s death. His flight from Vhagar awakens the other children and upsets Laena’s twin daughters, Rhaena and Baela, who feel that the dragon is theirs to claim. They meet Aemond at the entrance of a castle with Jacaerys and Lucerys.

And then the three families, through the children, fight.

Rhaena and Baela attack Aemond. Then Jacaerys and Lucerys attack Aemond. After Aemond calls out the last two bastards, they tag him as a team, with Jacaerys using a knife to cut out Aemond’s eye. The adults then show up to break up the fight. They are all called to Viserys for an explanation. 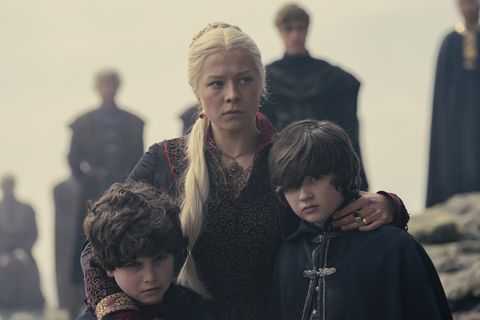 While the dragon is in the air, Rhaenyra and Daemon take a night walk on the beach. Rhaenyra accuses Daemon of leaving her in King’s Landing, weakening her position and making her unhappy. He says that she was just a girl, to which she replies that she’s not a girl anymore, and then the two kiss, finally consuming the weird vibes they’ve been giving off all season.

When they return to the castle, they find chaos. Rhaenyra’s children are bloodied and Alicent’s youngest is now missing an eye. Viserys asks for an explanation, during which Rhaenyra accuses Aemond of slandering her children, calling them “bastards”. Such a claim, he says, amounts to treason. Viserys immediately understands the gravity of the insult; he is perhaps the only one in the realm oblivious to the truth of “slander”. He asks Aemond to tell him where he heard the rumor. Aemond looks at his mother before blaming his brother. Aegon, who was drunk all night, tells the King that everyone knows the rumour; “Just look at them.”

Alicent, taking advantage of what appears to be a power shift, demands that Jacaerys also lose an eye as penance. This suggestion goes down very badly, and she ends up giving the boy a dagger herself, though Rhaenyra stops her, getting slashed in the process. Alicent, having finally shown her true intentions, drops the knife on her. Her father, holding her hand, then praises her tenacity, finally seeing her as someone ready to fight for the throne.

As the Hightowers leave with the King, Rhaenyra admits her weakness to Daemon; His boys are really bastards, the Hightowers just gained another dragon and Laenor won’t be able to provide support. She and Daemon then conspire to kill Laenor, allowing Rhaenyra to marry Daemon, uniting House Targaryens, adding more dragons to Rhaenyra’s side, and possibly forcing the alliance with the Velaryons, given that Daemon will be the father of the remaining kin. .

Corlys and Rhaenys Targaryen (Eve Best), meanwhile, discuss which family to support. Corlys supports Rhaenyra, regardless of the children’s illegitimacy. Rhaenys argues that Corlys should announce that Daemon’s two daughters will receive titles, since they are of Velaryon blood. Corlys chooses the name over blood and will have no more.

And then Laenor is killed. Daemon hires Qarl, a soldier who has been in Velaryon’s army all season, to do it for a coin. And everyone, including, initially, the viewers, is led to believe that he has done just that. But in the final moments of the episode, we see that Laenor and Qarl have faked their deaths; the two row out to open water as the episode ends. Will they figure things out in the future or will they just live happily ever after? This is a departure from Martin’s source material, so we’ll have to see.

Corlys and Rhaenys now believe they are childless, and Rhaenyra is conveniently without a husband. She and Daemon marry the Velaryons, their claims to the Throne now totally thwarted, watching.

The two sides of the civil war are now established: Daemon and Rhaenyra will square off against Hightowers, hopefully next week. Oh boy, we need some battle scenes. enough of all this Succession imitation. Give us a real war.

Urinary incontinence: 3 reasons why you might pee a little when you least expect it

One of the less celebrated skills that many of us cherish throughout early adulthood is training our bladders around our lifestyle. Notable achievements...
Read more

LONDON — There could hardly be a more dramatic start to Liz Truss' tenure as Britain's last prime minister.Just 48 hours after...
Read more

More of your savory foods could work with a honey finish

When it comes to sweeteners, I like sugar (unless we're talking about soft drinks, in which case I like the aspartame in Diet Coke...
Read more

Georgia Senate contest is all about race, actually

Black candidates can be, and often have to be, substitutes for white supremacy to be relevant to a majority white electorate. This is...
Read more