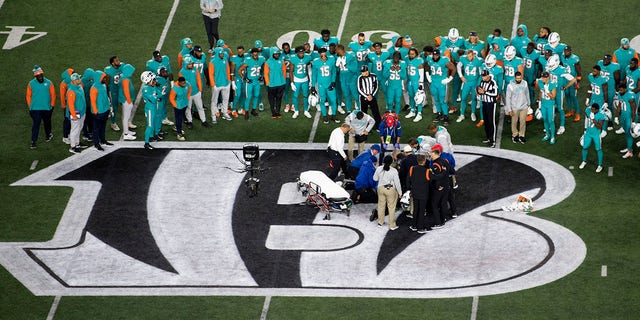 In the wake of the Tua Tagovailoa concussion controversy, the NFL and NFLPA issued a joint statement Saturday saying “modifications” are needed to the league’s concussion protocol.

“The NFL and NFLPA agree that modifications to the concussion protocol are needed to improve player safety,” the statement said.

“The NFLPA Mackey-White Health and Safety Committee and the NFL Head, Neck and Spine Committee have already begun discussions on the use of the term ‘gross motor instability,’ and we anticipate protocol changes to be made in the next few days based on what you’ve learned so far in the review process.

Teammates gather around Miami Dolphins quarterback Tua Tagovailoa after he was injured during the first half of a game against the Cincinnati Bengals on Thursday, Sept. 29, 2022, in Cincinnati.
(AP Photo/Emilee Chinn)

The NFLPA fired the neurotrauma consultant who checked Tagovailoa for a concussion on Sept. 25 after it was discovered he made “several errors” in his evaluation of the quarterback, according to multiple reports.

The Dolphins quarterback briefly left the Week 3 game against the Buffalo Bills after taking a hit and staggering on the grass.

Many believed Tagovailoa suffered a concussion on the play, but the team said he passed concussion protocols. Tagovailoa said he hyperextended his back, causing the fall.

However, the incident was enough for the players’ association to launch an investigation, which is still ongoing, according to the statement.

Miami Dolphins quarterback Tua Tagovailoa is carried off the field on a stretcher during the first half of a game against the Cincinnati Bengals Thursday, Sept. 29, 2022, in Cincinnati.
(AP Photo/Joshua A Bickel)

While the league said it had “all indications” that protocol was followed correctly, Tagovailoa suffered a terrifying injury Thursday. His fingers curled after a tackle similar to the one he received in Week 3. This time he suffered head and neck injuries and a confirmed concussion that resulted in a trip to the hospital.

He was released shortly after and flew back to Miami with the team following the game.

Thursday’s injuries sparked significant backlash, with many saying Tagovailoa shouldn’t have been playing and was in danger of serious injury.

Miami Dolphins quarterback Tua Tagovailoa walks off the field during the first half of a game against the Cincinnati Bengals on September 29, 2022 at Paycor Stadium in Cincinnati.
(Ian Johnson/Icon Sportswire via Getty Images)

The quarterback tweeted on Friday he was feeling “much better,” but the team said there is no timetable for his return.

The 22-game NWSL regular season is on the...
Read more

Nintendo Clears Up Confusion Over Zelda: Tears of the Kingdom Name

Nintendo announced the official title of the highly anticipated sequel to The Legend of Zelda: Breath of the Wild on Tuesday. ...
Read more

Exquisite spectacle of fossils throughout the rainforest ecosystem

Located an hour's drive from the city of Dunedin on New Zealand's South Island, Foulden Maar has become one of the most important yet...
Read more