Home ENTERTAINMENT Review: John Williams, at 90 and with a new violin concerto, is...
ENTERTAINMENT 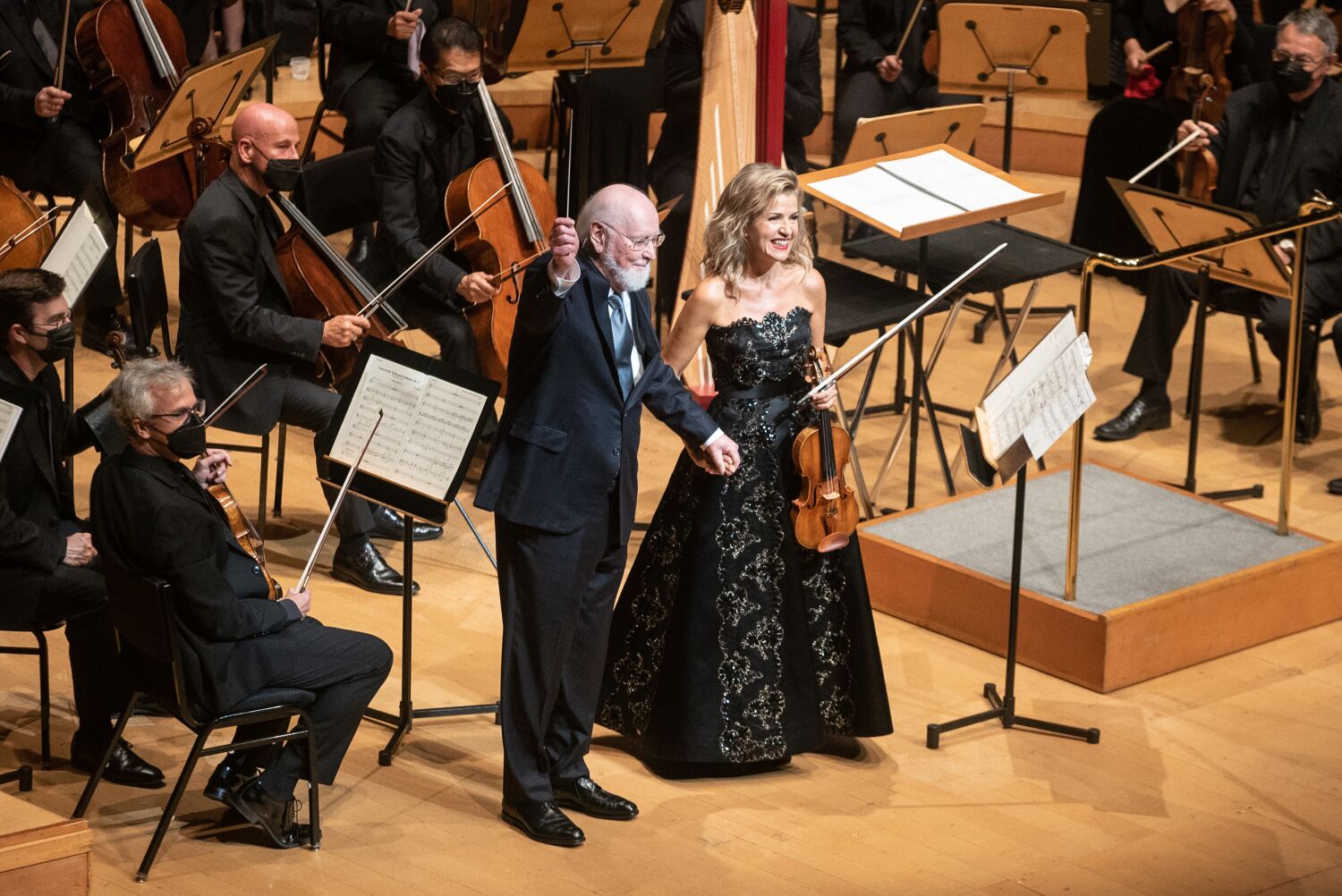 There’s nothing new about the Los Angeles Philharmonic celebrating John Williams, as the orchestra did at its annual opening gala at Walt Disney Concert Hall on Tuesday night. The orchestra has been happily celebrating Williams ever since he created a sensation by staging the first “Star Wars” Concert with Zubin Mehta at the Hollywood Bowl in 1977. It was the LA Phil that convinced Williams to conduct his own music (something almost every orchestras in the world has come to desire). Eight years ago, Gustavo Dudamel, arguably the biggest Williams fan in the world, dedicated a glittering season-opening gala to Williams.

Celebrating Williams, who turned 90 this year, is, indeed, an industry. Surely no composer in history has ever been so awarded. He has been a fixture at the Academy Awards since the first of 52 nominations in 1968 for “Valley of the Dolls.” He has won five, in addition to his 25 Grammy Awards, his Emmy Awards, his BAFTAs and everything in between. It was announced on Saturday that prior to Queen Elizabeth II’s death, she made Williams an Honorary Knight Commander of the British Empire.

Loved by every generation of audiences for half a century, Williams has done it all. International Movie Data Base cites 463 soundtrack credits for Williams and 166 film scores. Billions, yes, billions have heard and continue to hear the sound of the traditional orchestra thanks to Williams’ scores.

Despite all this, however, Williams has not attracted much attention, until very recently, for being part of the classical orchestral tradition, that is, for his numerous concertos and other pieces of orchestral and chamber music. Not even for his much-publicized Cello Concerto written for Yo-Yo Ma in 1994, nor the violin, cello, clarinet and piano quartet “Air and Simple Gifts” he wrote for Barack Obama’s presidential inauguration in 2009.

Williams’s last concert of great renown and media event, his second for violin and written for Anne-Sophie Mutter, was premiered last summer by the Boston Symphony at Tanglewood with the composer conducting, and this time it went gold. He was quick to release a beautiful Deutsche Grammophon recording after the premiere.

The West Coast premiere of Williams’ Second Violin Concerto with Mutter and the composer conducting the LA Phil was the centerpiece of Tuesday’s gala. Dudamel’s role was to make short excerpts from the film scores and introduce Williams, whom he called one of the greatest composers of all time, pausing to let that sink in and show that he meant it.

The concert format is clearly Williams’ favourite. The first was for flute in 1969 and they have kept coming. The Second Violin Concerto is the 19th of his concert works for solo instrument and orchestra (not all of them are called concertos, but they all are). The concerts don’t sound like Williams movie soundtracks, but the medium suits him. He revels in the drama between a soloist and the orchestra, which he uses, as in his film scores, with great imagination and virtuosity.

Instruments, for Williams, are personalities, and a specific musician has inspired each of the concertos, whether they’re celebrated soloists or members of an orchestra he knows well (there’s a clarinet concerto by former LA Phil principal clarinetist Michele Zukovsky, worth taking off the shelf). ).

The concert is also the ideal format for Williams to employ one of his most successful cinematic devices: a magically evocative scene. In the Horn Concerto, she does it with the pealing of the bells. In the new violin concerto, it is the harp that continues to interact with the violin solo throughout the concerto.

The Second Violin Concerto is in four movements, each with an allusive title, another evocative common trait in Williams’s concert pieces. In this case they are Prologue, Rounds, Dactyls and Epilogue. The tone is elegiac, as are many of his concert scores. The First Violin Concerto was written in 1996 in memory of his recently deceased wife. He pays a serene and timely tribute to trees in three special concertos: “The Five Sacred Trees” (for bassoon), “TreeSong” (for violin) and “On Willows and Birches” (for harp).

There is nothing specific in the concert for Mutter, although I wonder if on some level he can pay tribute to André Previn, who was one of Williams’ oldest friends and died in 2019. Mutter was the last (of five) wife and last Previn’s muse. . Others will pick up the Second Violin Concerto, but it’s pure motherfucker in a way that none of the other concertos written for it (like Witold Lutoslawski’s brilliant one) are.

As if beginning a cinematographic fantasy, the harp seems to invite the violin into an imaginary realm. Mother, whose tone is famous for its robustness and meatiness, plays as if she is looking around her in her new surroundings. What is this? What’s that? Those are the reactions of her quietly mocking her.

The movements have their individual tones, but the predominant impression is not so much of form as of continuous exploration, of Williams breaking free from confines to compose a scene in a film. The mother enthusiastically reveals a range of emotions that have an improvisational quality, stopping more than once to share her feelings on the harp. The orchestra’s eloquent conductor, Emmanuel Ceysson, and his red harp stand at the head of the orchestra. If your concert music can sometimes be jerky, slow movements can be counted on to contain the charm.

Much of this concert is slow. It’s the best of Williams. Or maybe it isn’t. The Cello Concerto was revised last year and newly recorded by Ma, giving it new life. Clearly it’s time to revive the other concerts. Let those inspired by trees come first.

Dudamel will be worth one day directing the concert. Although he is a very accomplished conductor, Williams is all business on the podium, the way he should be on the soundstage. There’s a vibrancy of sound to the new recording that was somehow missing in the concert hall. But his continued vitality and sheer life-giving presence is something no one else could provide.

Dudamel, on the other hand, rocked the room with “Just Down Street” and excerpts from “Indiana Jones,” “Star Wars” and “ET,” as he had unforgettably done in a Disney tribute four seasons ago, recording live that he is the most exciting Williams on record.

As for honors, Dudamel comes home with two new ones. After opening his second season as musical director of the Paris Opera with a performance of “Tosca” on September 3, French President Emmanuel Macron named Dudamel an Officer of the French Order of Arts and Letters. On Sunday, two days before the gala, the Glenn Gould Foundation presented Dudamel with the $100,000 Glenn Gould Award, as in 2008 to his mentor, José Antonio Abreu.

For some reason this year (supply chain?), no sparkly glitter cascaded from the ceiling, a Disney gala specialty. But there was much to celebrate.

Netflix’s ‘The Mole’ Review: A Rebirth of Self-Aware Reality

The first two seasons of “The Mole” came at an extraordinary time for the reality TV genre. The series, which premiered in 2001,...
Read more
ENTERTAINMENT

Lee made his magnum opus over the course of six years. Then, in the mid-'90s, he stopped making movies altogether. Outside of...
Read more

Historically, you are in the minority: you are part of the post-1700 Earth people, also known as those who believed there were only two...
Read more

The arrival of fall marks the beginning of an over-saturation of pumpkin spice-flavored products on grocery store shelves and coffee shop menus.
Read more